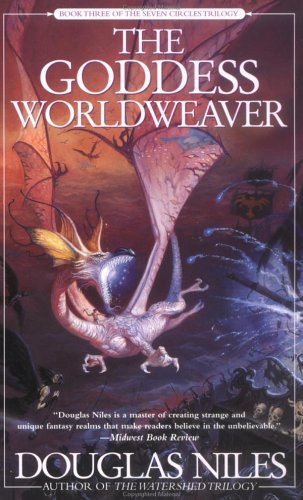 THE GODDESS WORLDWEAVER: Book Three of the Seven Circles Trilogy

The conclusion of Niles's Seven Circles trilogy offers the same brisk, workmanlike, game-flavored fantasy as its two predecessors. In the sphere of the Circles, Nayve, the last land of peace and harmony, is under attack by the hordes of the sinister Deathlord Karlath-Fayd, who uses the spirits of dead human warriors to crew his fleet. Meanwhile, the druids of Nayve are rallying to their defense their own human champions, such as Crazy Horse and the Aztec warrior Natac. Serious internal troubles in Nayve could be fatal, if it weren't for seekers of justice like the dwarf-woman Darann, who fights against a planned holocaust of the goblins. The forces of good still seem doomed, but Miradel the druid suspects that the villains are not what she's been told and, with Natac's help, unmasks the real enemy. While the basic plot and standard-brand races may be all too familiar to fantasy fans, role-playing gamers will appreciate the author's deft hand with military history. This is recommended for those moving on to accessible print fantasy from the movies.