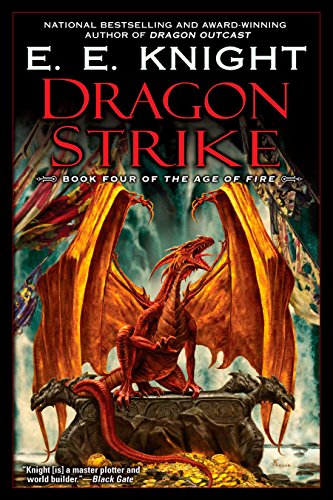 Dragon Strike: Book Four of the Age of Fire

The entertaining fourth Age of Fire novel (after 2007's ) reunites three dragon siblings in a land at the threshold of major change. When scaleless AuRon the Gray hears rumors of his long-lost sister, Wistala, he leaves his family on the Isle of Ice to search for her. Their paths cross in Lavadome, where their outcast brother, RuGaard, now rules. Although some blame RuGaard for a recent food blight, the more likely source is Ghioz's masked Red Queen, who wants to make Lavadome part of her empire. Brought together by chance, the siblings must overcome their differences and persuade rival nations to stand together against the Red Queen's forces. Knight turns the familiar features of epic fantasy upside down in this unique world of medieval politics and ancient magic seen through the eyes of dragons.