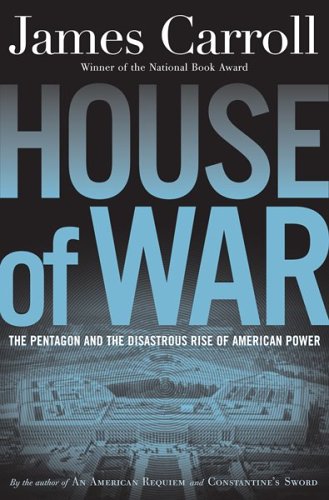 House of War: The Pentagon and the Disastrous Rise of American Power

If there were nothing more to Carroll's book than its chronicling of the U.S. military's amassing of power and influence from WWII to the present, it would still be valuable history. But the National Book Award winner ( ) makes the story something else altogether. "The lifetime of the Pentagon is my lifetime," he asserts, noting that the building had its dedication ceremony the week he was born; he also grew up playing in its maze-like corridors while his father worked as a high-ranking air force general. The nuclear dread that dominated the Cold War era thus plays out as personal and family drama, turning the book into "[my] long-delayed conversation with [my] father." It's strongest in its first half, where the development of atomic power and the turmoil of the Vietnam era hold the greatest personal significance for Carroll; later sections on the Reagan and Clinton eras are informative but less intimate. Carroll's approach can be poetic—he makes much, for example, of the coincidence that the Pentagon groundbreaking took place on September 11, 1941—but the emotional weight he brings to a Chomsky-like critique of American militarism results in an aggressively compelling history. Photos.