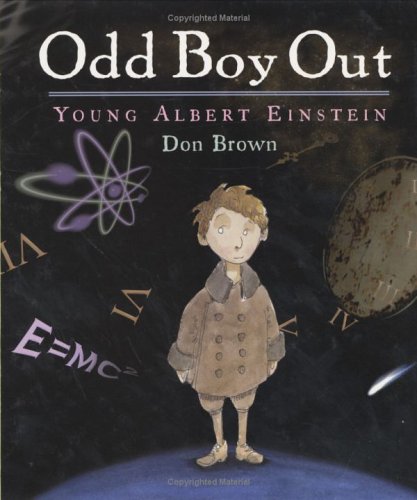 Brown ( ) shapes an impressionistic portrait of Einstein in his early years, opening with comments of family members gazing upon the newborn (his grandmother says he is "much too fat" and "his mother fears his head is too big"). Writing in the present tense, the author shares anecdotes that reveal young Einstein's character: his temper tantrums scare away his tutor; he brings "a single-minded attention" to such pastimes as building elaborate houses of cards; his parents so encourage his independence that they allow him to wander the streets of Munich alone at the age of four; and the boy early on displays an extraordinary skill at and fascination with mathematics (though other schoolwork bores him). True to the book's title, Brown emphasizes ways in which Einstein fails to fit in with his peers. He dislikes sports, is disturbed rather than excited at the sight of soldiers parading in the street and, as the only Jewish student in school, is taunted by his classmates. The writing occasionally becomes muddy when discussing Einstein's scientific thinking and discoveries ("He says that everything is in motion and when something moves very fast, as fast as light, strange things happen, like clocks running slower and objects becoming shorter"), targeting the book more to kids who identify with the hero's personality traits than to those interested in the man's ideas. But Brown's narrative and appealingly quirky pen-and-ink and watercolor art effectively illuminate the eccentricities and intelligence of Einstein the boy and the man. Ages 4-8.