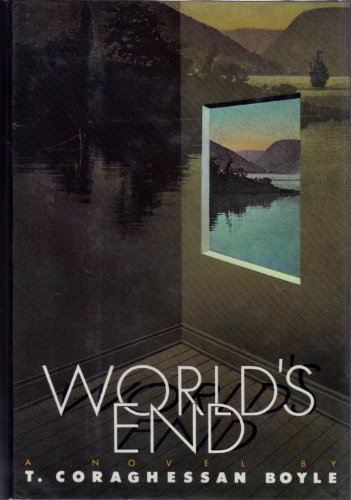 Boyle has been developing a growing reputation among lovers of rich comic writing for his handful of previous stories and novels. But World's End is one of those dramatic leaps forward that show an accomplished writer ambitiously and successfully lengthening his stride. It could easily be called a multigenerational saga, but that would give no idea of the depth of social and historical perspective Boyle brings to his tale. Set in the spectacular Hudson Valley country, an hour north of New York, World's End has all the elements of magic, fable, legend, and a sense of weather and landscape one more often finds in Southern writers. But it also shows a remarkable grasp of the continuity of culture over more than 300 years, effortlessly linking the stories of early Dutch settlers in the valley, the Indians they displaced and their descendants in the McCarthyite late 1940s and wild 1960s. The story, which moves with exceptional and convincing ease across the generations, is of the linked fates of the Van Brunt and Van Wart families. These have come down in modern times to Walter Van Brunt, a dreamer addled by drink and dope who loses both feet in motorbike accidents and who is haunted by figures and voices from the past, and Depeyster Van Wart, deeply conservative manufacturer and landowner, hanging on desperately to ancestral memories in a world he despises. Boyle is totally attuned to changing mores over the centuries, and broad enough in his sympathies to identify with the best in both conservative and rebel. Many of the book's central issues of loyalties and betrayal come to a head in a e riveting passage built on the Peekskill riots of 1949, in which leftists trying to attend a concert at which Paul Robeson was to sing were attacked by embittered locals inflamed by the presence of ""niggers and kikes.'' Boyle, a native of the area, is so deeply steeped in its history that he can absorb a real incident and transform it organically into a horrifying episode in a novel. World's End is a triumph; resonant, richly imagined and written with unfailing eloquence. BOMC Alternate. (October 8)
close
Details