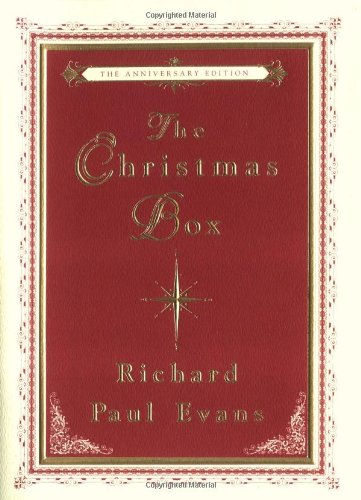 Self-published in paperback during the Christmas season 1994, Evans's first novel quickly gained national media attention. Now the cleverly told tale, which the author reputedly wrote for his daughters and which revels in sentimentality, is available in hardcover. The story relates how a young couple, Richard (who narrates) and Keri, accept a position to care for a lonely widow, Mary Parkin, in her spacious Victorian mansion. As Christmas draws near, Mary becomes anxious about Richard's obsession with success and his failure to make time for his family. She urges him to reconsider his priorities, but he is always too busy to heed her advice. It is only when Mary is on her deathbed and her secret sorrow is revealed through the letter-laden Christmas box of the title that Richard realizes what she has been trying to tell him. The message concerns love, of course, and the strings Evans pulls to vivify it should squeeze sobs from even the stoniest of hearts. It's notable, however, that unlike many well-known Christmas tales (such as Dickens's), which carry that message in a basically nonsectarian manner, this is steeped in specific Christian imagery and belief as the author draws on the drama of Jesus as God's sacrifice for the world's sins, and of his crucifixion and resurrection. 750,000 first printing; BOMC, QPB, BOMC Homestyle Book Club, BOMC Craft Books Club, BOMC Children's Book Club alternates; simultaneous S & S audio and S & S Libros En Espanol edition; author tour. (Nov.)
close
Details