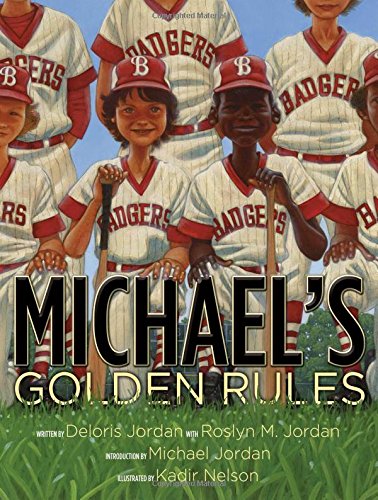 This follow-up to , which dabbles in the subject's less successful flirtation with baseball, may disappoint fans of the earlier book. The tale opens as young Michael's best friend, Jonathan, strikes out at the end of a game their Little League team loses. Walking home with the lads, Michael's uncle utters the well-worn platitude that there's "a lot more to a game than winning or losing.... It's all about how you play the game." Uncle Jack, a former baseball player, then shares with the boys his book of 10 "golden rules" (e.g., "Pay attention to the coach at times," "Be a team player" and "Have fun!"). These come into obvious play during the big end-of-season game, which the boys' team predictably loses. When the coach assures them that they "played like winners," Jonathan gushes that, despite the loss, he feels good because "we all played together and gave our all." Michael then coos back, "Now, that's what I call a home run." Nelson's ( ) oil paintings are oddly uneven here; the artwork ably conveys the boys' emotions yet overall the portraits are marred by inconsistent likenesses of each. Ages 6-10.