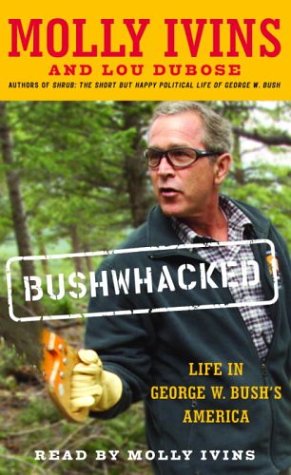 "If y'all had've read the first book, we wouldn't've had to write this one," says Ivins, a columnist who, along with co-author Lou Dubose, wrote , which covered "Dubya's" short but sour reign as a Texas governor. This book picks up where left off, detailing Bush's first term as the not-quite-elected President of the United States. Ivins reads her own material and audibly enjoys discussing what she sees as tax breaks for the rich, environmental and safety deregulation, corporate toadyism and the loss of Americans' civil liberties, though it is also very apparent that behind the laughter lies genuine sadness and anger. In fact, it's hard to listen to this audiobook without simultaneously laughing and becoming incensed. Ivins is a joy to listen to. Her snappy quips, razor wit and downright damnation of the current administration are tempered by a lovely Texas drawl. She's mad as hell and is ready to do something about it, yet she never lets that fact interfere with her delightfully offbeat sense of humor, her engaging delivery or her well-researched argument.