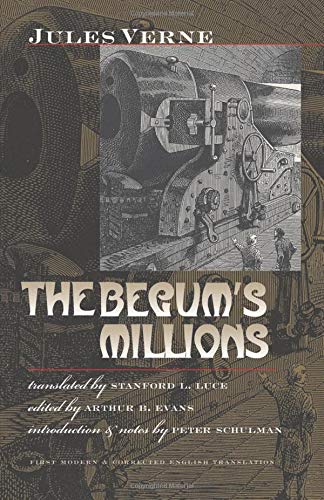 Originally and inexpertly translated in 1879, Verne's cautionary tale concerns human failings in the face of both wealth and scientific progress. Instead of valorizing progress like most Verne novels, this one presents contested definitions of the utopian impulse to reform human nature. Two scientists, the benevolent, modest Frenchman, Dr. Sarrasin, and the egotistical German, Herr Schultze, find that they share a large inheritance, five million francs, left by a French ancestor who married East-Indian royalty. They use the money to realize two ""utopian"" cities in the American Northwest. Verne carefully presents the hygienic, peaceful, rational city France-Ville of Dr. Sarrasin as a haven for enlightened, cooperative citizens, in contrast to the City of Steel, the industrialized hell of Herr Schultze. With the City of Steel's resources, the German plots the destruction of France-Ville as his first act in ensuring the subjugation of all inferior, non-Saxon races. Since the work is full of racial and personal stereotypes, long paragraphs explaining technological, social and scientific projects, unmediated by Verne's usual humor or adventure plots, it will appeal most to the literary completist.
close
Details