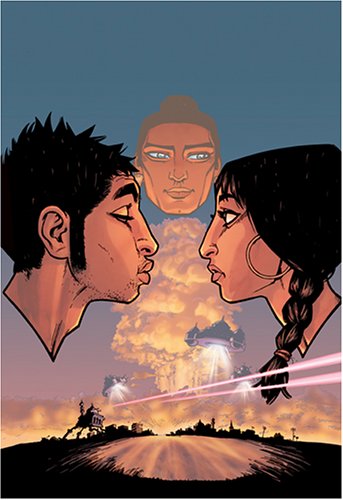 Morrison is well known for the bizarre ideas that thrive in his comics like , and . What is often forgotten is that he balances those off-the-wall ideas with a wonderful humanistic touch that gives readers a reason to care about his stories. Here, Morrison and Bond tell a story that features ancient giants rampaging through London and New York and the superhero team, the Ultra-Hadeen, who set out to stop them. It also tells the tale of Ali, a Pakistani teen who frets over his arranged marriage until he meets his bride-to-be, Sofia, and find out she's all right. Too bad that by that point Prince Ben Rama of the Ultra-Hadeen has also fallen for her. The love triangle and Ali's nerve-wracked reaction to it is the central story. It's told with real compassion for all the characters and also with a lot of humor. Morrison gives his characters plenty of great quips in the middle of apparent destruction, making all the big concepts of the book flow easily. Bond's art gives the fantastic concepts a look that is half Jack Kirby and half ancient Middle Eastern imagery. He deftly communicates the characters' emotional states, which is the most important thing for a story like this.