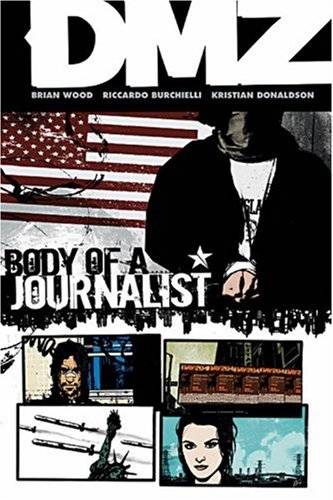 DMZ Vol. 2: Body of a Journalist

Readers might assume that they're watching a report from Baghdad as they see a suicide bomber massacring a ragged urban crowd gathered for a clean water distribution in this dark political satire. Actually, the scene is New York City, front line in a full-scale civil war between Free States rebels and the U.S. government. The main focus is Matty Roth, a kid who thought he was entering the city as mere assistant to a veteran reporter but who now finds himself an agonizingly "embedded journalist" with more power and responsibilities than he ever wanted. For Matty and readers, there's no longer any safe distance from the violence. At the same time, however, the residents of the DMZ feel unexpected, growing satisfaction at what they can do now that they've been violently freed from a government's sham protection, with only themselves to rely on. Wood's scripts present the characters' mingled pain and hope well, but Burchielli's outstanding art really sells the story by intensifying familiar urban grunge into a Third –World–like battle zone. He has a good sense of the city as a sniper-haunted landscape, from deserted streets to a maimed Statue of Liberty. This book is a disturbing, challenging success.