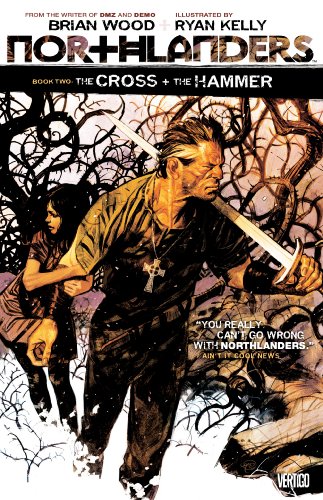 Northlanders, Vol. 2: The Cross and the Hammer

This reader-friendly second collection of Wood’s series, illustrated by Kelly, tells an engaging tale of cultures clashing. A self-contained story, it relates to the previous volume only as an overall portrayal of the impact of the Vikings in Europe in a way that doesn’t reduce them to the familiar blustery stereotype of ocean-faring, land-pillaging warriors. This volume is set against the backdrop of Viking colonies in Ireland in the early 11th century, a land portrayed with a harsh beauty by Kelly’s artwork. Magnus, an Irishman, blames the conquerors in his lands for robbing and killing his people, and so begins to kill Viking settlers near Dublin. Lord Ragnar Ragnarsson is sent to investigate these crimes. While Magnus hides in the countryside with his young daughter, Brigid, Ragnar and his band of men follow the trail of dead bodies Magnus leaves in his wake. The resulting bloodbath is also an effective psychological portrait of the two main characters in a highly enjoyable book that is as smart as it is action packed.