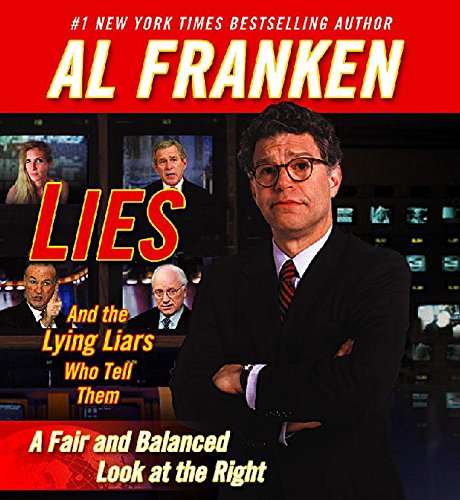 LIES AND THE LYING LIARS WHO TELL THEM: A Fair and Balanced Look at the Right

This witty, scrupulously researched and expertly delivered audio production accomplishes what few nonfiction audio books manage to do—it realizes the full potential of the format. Even those who have already read Franken's book should take the time to listen to this superb audio adaptation, which is enhanced by Franken's impeccable sense of comic timing, eerily precise impersonations and inclusion of source materials. In the most compelling section, for example, Franken juxtaposes two revealing clips to illustrate his view that the late Senator Paul Wellstone's memorial was "cynically distorted for partisan political advantage" not by the Democrats, but by the Republicans. The first clip is from Rush Limbaugh's radio show, where he proclaims in a heavy, lugubrious voice, "[The Democrats] wrenched Wellstone's soul right out of the grave, assumed it for themselves and then used it for their own blatant, selfish political ambitions.... Show me where the grief was!" Franken follows this with an excerpt from the memorial—which will bring tears to the eyes of any listener, partisan or non—in which David McLaughlin pays tribute to his younger brother, Will, who was Wellstone's driver, bodyguard, adviser and "the one who kept Paul going." By turns sad, funny and serious (but always satirical), this audio book has all the entertainment value of fiction (and even a one-act play called The Waitress and The Lawyer based on one of President Bush's radio addresses), but the issues Franken raises will stay with listeners long after their laughter has died down.