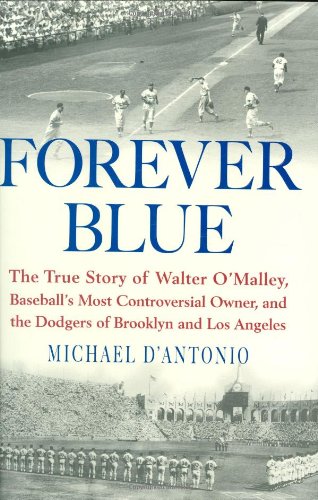 Forever Blue: The True Story of Walter O'Malley, Baseball's Most Controversial Owner, and the Dodgers of Brooklyn and Los Angeles

Although Walter O'Malley has been dead for nearly 30 years, D'Antonio's latest work is perhaps the most meticulously detailed and comprehensive account to date of the former owner of the Brooklyn and Los Angeles Dodgers. Through research in O'Malley's letters, documents and myriad interviews with those close to him, D'Antonio ( ) presents a well-rounded portrayal of one of the most polarizing figures in baseball history: one New York writer referred to O'Malley as “one of the three worst human beings who ever lived,” while a Los Angeles journalist described O'Malley as a man who “did more for baseball than any commissioner.” D'Antonio paints the whole picture, starting with O'Malley's early days as a lawyer who originally began working with the club in a “troubleshooting” capacity, to taking total control of ownership in 1950. During O'Malley's tenure with the Dodgers, the team had some of its most famous moments in history—the debut of Jackie Robinson, the club's first World Series title in 1955 and, of course, the team's infamous move to Los Angeles. D'Antonio explores everything—O'Malley's business dealings, his personal relationships with Robinson and Branch Rickey, the on-the-field fortunes of the Dodgers. With D'Antonio's access to O'Malley's most personal documents, even baseball historians will find something to learn.