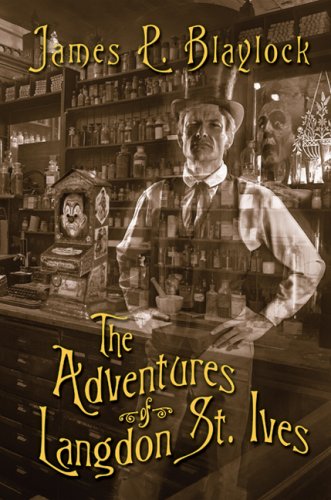 The Adventures of Langdon St. Ives

Long recognized as a master of steampunk fiction, Blaylock ( ) collects four short stories and two novels featuring indefatigable and unflappable Victorian scientist Langdon St. Ives in a deluxe omnibus edition profusely and masterfully illustrated by J.K. Potter. In “The Ape-Box Affair,” St. Ives attempts to launch an orangutan named Newton into outer space, but the ship crashes in a pond in St. James Park, terrifying the people of London into believing that they've been invaded by aliens. In Philip K. Dick Award–winner , St. Ives battles the evil, hunchbacked genius Dr. Ignacio Narbondo, who attempts to awaken the dead, while in , a grief-beset St. Ives must counter Narbondo's threat to throw the Earth in front of a passing comet. Intricately detailed if somewhat haphazardly plotted, at once droll and horrific, these highly mannered tales are classic examples of this popular subgenre.