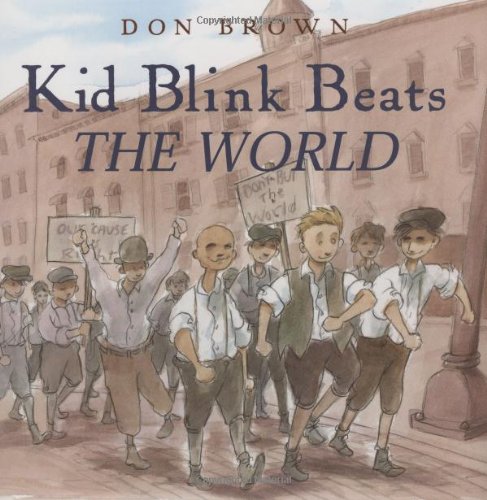 Most of Brown's ( , reviewed above) previous biographies have celebrated famous men and women. Here, the hero is a child. The son of poor immigrants, Kid Blink (so nicknamed, according to an endnote, for a blind eye) sells newspapers on New York City's streets. In the summer of 1899, when Mr. Pulitzer and Mr. Hearst raise the wholesale price for 10 copies of their papers ( and ) from five to six cents, Kid Blink and his fellow "newsies" decide to strike: "I'm trying to figure how ten cents on a hundred papers can mean more to a millionaire than it does to newsboys, an' I can't see it," Kid Blink says. "If they can't spare it, how can we?" The boy's public speeches unite hundreds of newsboys. Withstanding threats of violence and jail sentences, they stay true to their own code of chivalry ("A feller don't soak a lady," the hero tells newsies who threaten to steal papers from a woman's newsstand). In Brown's spreads and spot illustrations, draft horses, knickerbockers and bowler hats convey the flavor of life in the city more than 100 years ago. Brown's dreamy sepia washes soften scenes in which thugs hired by the newspaper magnates chase boys down alleys and policemen take children to jail. Although younger listeners may not fully understand the nature of the compromise that stopped the strike, they will be thrilled by the idea of a political movement which crowns an urban boy underdog as its leader, and by the sympathetic adults who shower Kid Blink and his friends with coins. Ages 5-9.