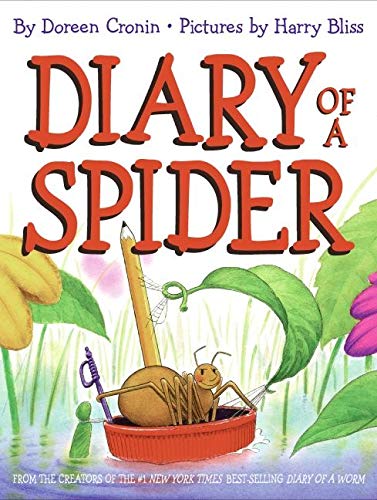 Diary of a Spider

Cronin and Bliss repeat the comic ingredients that made so successful in this rib-tickling sequel. This time the diary is written by Worm's friend Spider and filled with similar verbal high jinks, deadpan humor and visual jokes that offer readers a whimsical glimpse of the world from a small creature's point of view. Endpapers feature photos of Spider's family as well as his favorite book ( ), his discovery of a "neat sculpture!" (a toilet bowl) and a playbill from his school's production of "The Itsy Bitsy Spider" (a review blurb by Worm says, " "). Children will relate to the book's droll humor, as when Spider goes to the park with his sister ("We tried the seesaw. It didn't work") or when he takes his molted skin for show-and-tell. A slight story line about the tension between Spider's friendship with Fly and his Grampa's prejudice against all six-legged bugs threads together the amusing vignettes. (When Grampa says, "Without spiders, insects could take over the world," Bliss features a menacing alien bug as President of the United States.) This endearing book delivers a gentle message that comes through when Spider muses, "I wish that people wouldn't judge all spiders based on the few spiders that bite. I know if we took the time to get to know each other, we would get along just fine. Just like me and Fly." Ages 4-8.