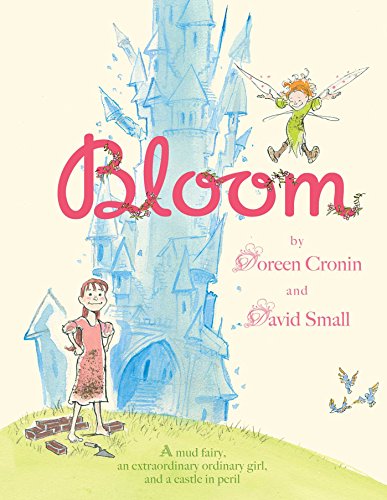 This smart, subversive fairy tale is set in a kingdom whose palace is made entirely of glass and whose inhabitants scorn dirt and untidiness. The kingdom was once home to a red-haired fairy named Bloom, whose magic could “spin sand into glass, turn weeds into blossoms, and grow a trickle of rainwater into a racing river.” But Bloom’s heavy steps and muddy footprints drew complaints, and she retired, exasperated, to the forest. Now, the king’s beautiful glass castle leaks, and everything else is “held together by tape, glue, and peasants.” Small’s (Glamourpuss) witty ink-and-wash drawings follow the king and queen as they enter the forest to search for the powerful fairy, but they refuse to believe that Bloom and the bucket of mud she proffers is the creature they seek. They dispatch their sweet servant girl Genevieve to locate her instead. Bloom questions Genevieve closely: “Why would the king and queen send a delicate child... to do something they could not?” she asks. “Because I am ordinary,” Genevieve confesses. Outraged that any girl would value herself so lightly, Bloom immediately begins Genevieve’s training in “magic”—up to their elbows in mud, the two make bricks and build a house. When Genevieve returns to the kingdom armed with new knowledge and spattered with mud, she thunders, “I am here!” Cronin (the Click, Clack, Moo books) juggles thematic elements with grace, mixing fairy-tale parody with maker tale and girl-power story to celebrate mess, chaos, and big plans. When seen up close, Cronin suggests, fairy-tale “magic” might really be no more than the willingness to get one’s hands dirty. Ages 4–8. Agent: Holly McGhee, Pippin Properties. (Feb.)
close
Details