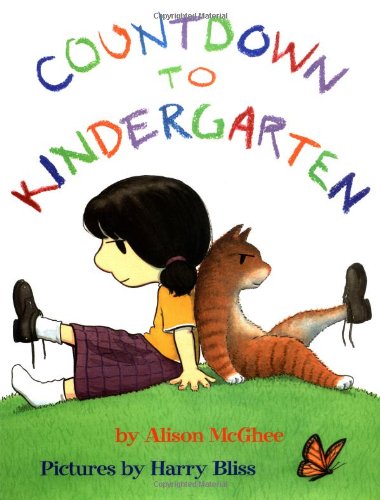 Ten days before kindergarten starts, a dark-haired girl wakes up in a panic. "I've heard from a first grader that they have a lot of rules there," she confides, locking eyes with the audience. "You have to know how to tie your shoes. By yourself." Days nine, eight, seven and so on bring various shoelace disasters. The girl tangles the laces around her cat by accident; she drenches them with syrup on purpose. At dinner, her father jokes, "How's your bowl of shoelaces—I mean spaghetti?" If all the girl's fears are for naught, at least they provide her with a conversation opener: at kindergarten, she commiserates with one, then two, then three new friends who can't tie their shoes either. In this witty children's debut, novelist McGhee () combines a puckishly structured counting book like Peggy Rathmann's with an amiable exploration of new-school anxiety. Bliss () makes skillful use of voice bubbles and cartoon gestures, surrounding the narrator with a teddy bear, a rag doll and a sympathetic, precocious tabby that recalls the bookish dog he created for . Subtle details surface with every rereading. Ages 3-7.