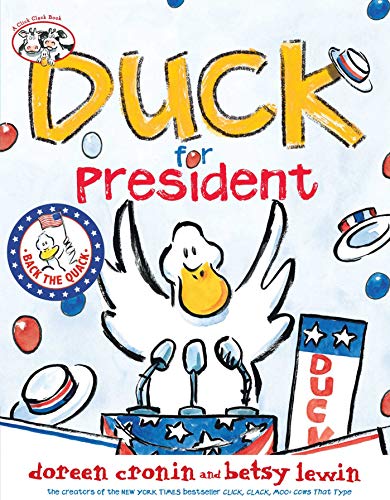 As the run-up to the 2004 presidential election gathers momentum, it appears that George W. Bush may have more than Democrats on his tail. Duck, the ever-scheming star of has thrown his feathers in the ring. Fed-up with the drudgery of his barnyard chores, Duck decides to officially buck authority and hold an election to determine who should be in charge. The web-footed wonder narrowly defeats Farmer Brown, but soon discovers that running a farm is not all it's cracked up to be. Duck plans a move to greener pastures by entering—and eventually winning—the race for governor. However, for the ambitious feathered hero, only the highest office in the land will do, and he charts a course for the Oval Office, which also has its drawbacks. Though Cronin's latest Duck tale introduces the basic mechanics of the election process, it lacks many of the silly high jinks and clever plot turns that gave its predecessors their charm. A few nods to past presidents appear in both text and art (Nixon, Clinton, G.H.W. Bush), offering older readers a knowing wink. The focus on Duck's dissatisfaction and loneliness at the top makes the story line perhaps better suited to adults, even as Lewin's chunky-outlined watercolors continue to cater to the younger crowd with her usual dashes of humor and daffy sweetness. Her depictions of the campaign-trail motorcades, parades and town meetings are a hoot. All ages.