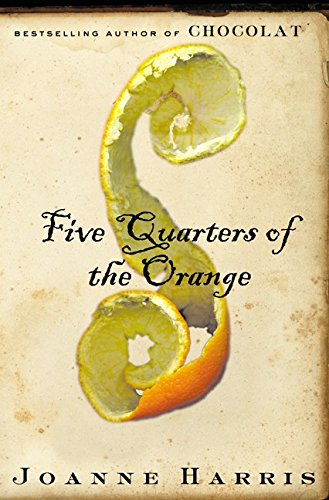 FIVE QUARTERS OF THE ORANGE

If Harris's previous novel, , was an adorably sweet morsel of French village lore, then this, her third, is a richer, more complex dessert wine. Still using her arsenal of culinary metaphors, quirky characters and slightly surreal incidents, Harris presents a complicated but beautiful tale involving misfortune, mystery and intense family relations. Framboise Dartigen, a feisty yet sensitive girl, grew up in a gossip-ridden hamlet on the banks of the Loire called Les Laveuses. Striving for attention and power, nine-year-old Framboise (or Boise, to her family) took to playing nasty tricks on her headstrong, mentally vulnerable mother, Mirabelle, who had a weakness for oranges. And it was not the usual affliction—Mirabelle actually experienced "spells" (akin to epileptic fits) if she even smelled the fruit. But despite Framboise's girlish pranks, Mirabelle's maternal instinct was strong. When her children befriended German soldiers who were in the village during the World War II occupation, things went awry, and mother and children were forced to flee. As Framboise tells the tale, she's in her 60s and has returned to Les Laveuses, posing as a widow named Françoise Simon. When the café she owns is reviewed in a national food magazine, her cover is blown and the past resurfaces. Harris has constructed a multilayered plot, punctuated with scrumptious descriptions of French delicacies and telling depictions of the war's jolting effects on one fragile family. This intense work brims with sensuality and sensitivity.