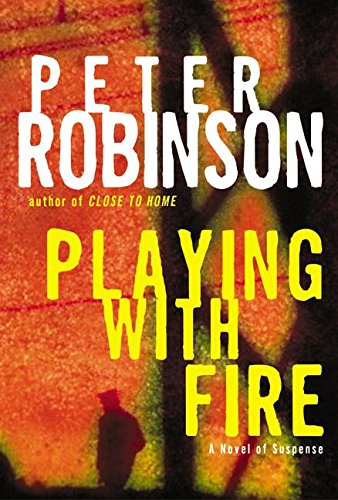 Edgar winner Robinson's 14th police procedural to feature Yorkshire DCI Alan Banks isn't quite up to the level of last year's superlative , but it's nonetheless an engaging pleasure. Three victims have died in two suspicious fires: Tom McMahon, an eccentric, mostly unsuccessful local artist; Tina Aspern, a young heroin addict estranged from an abusive stepfather; and Roland Gardiner, another down-and-out chap but one who just happens to have a fireproof safe containing a substantial amount of cash and what appears to be a Turner watercolor. To solve the crimes, Banks and his team—DI Annie Cabbot and the refreshingly direct DC Winsome Jackman—pursue good old-fashioned police work, interviewing witnesses, neighbors, relatives and lovers and sifting through the evidence gathered by their specialist colleagues. They also make ample use of contemporary forensic technology. In keeping with the moody and introspective Alan Banks, the narrative style is tempered and deliberate, perhaps too much so for those who prefer, say, the riveting urgency of a Michael Connelly thriller. Characterization is Robinson's real strength. Virtually every character is etched with care, precision and emotional insight. With each book, the quietly competent Alan Banks gets more and more human; like red wine, he gets better and more interesting with age.