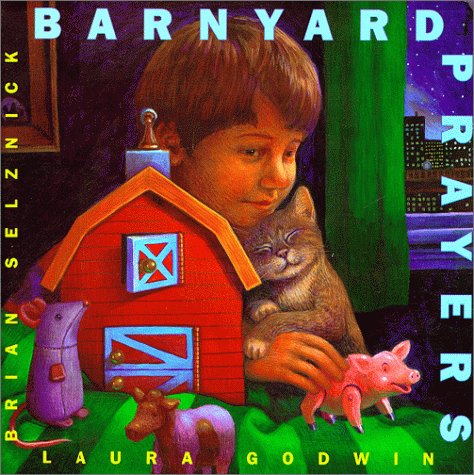 Words and pictures play equal roles in this inviting volume, which playfully reprises and refreshes familiar themes and conceits. Selznick's (The Houdini Box) paintings first present a city boy preparing for sleep. Opening his little red barn set, he takes out a toy animal; in subsequent pictures, now full-bleed, the boy has entered the world of the animals, stroking a colt, visiting the henhouse, etc. The boy's deep affection for his charges is palpable, but the vigorous variety of perspectives and a certain mischief in some of the animals' expressions steer this fantasy safely clear of nostalgia. Godwin's (Christmas in the Manger) text consists of a series of verse prayers, each offered by a different character. These, too, mix the cozy with the puckish. The first poem, ""The Farmer's Prayer,"" which faces an image of the boy in his bedroom, is fairly conventional (""Watch over us, protected, whole,/ And bless this farmer's happy soul""). Other sequences are droll. The fox's prayer includes the plea ""One fine fat hen is all I ask. / Besides, [those hens] are so foolish they'd never notice if one of their own were missing""; on the opposite page, the hens pray: ""We ask You once again/ To watch over us all,/ Six, seven, eight,/ Nine nine? Amen."" A few poems turn jokey (the drones' prayer ends with ""And God/ Save our queen), but on the whole this bedtime book will grab hold of kids' imaginations. Ages 3-7. (Mar.)
close
Details