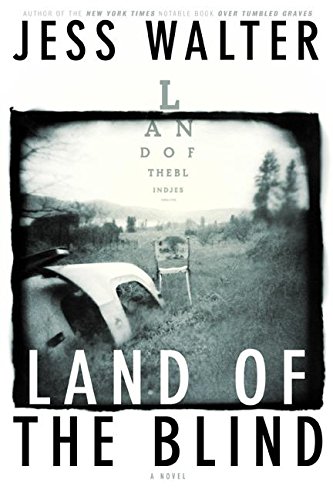 LAND OF THE BLIND

Spokane detective Caroline Mabry, the heroine of Walter's acclaimed debut, , returns in a supporting role in this new thriller. Burned out on the job and stuck in the night shift, Caroline is in the station house when Clark Mason stumbles in after midnight, needing to confess to a murder. With his fitted shirt, long tousled hair and eye patch (all three black), Clark intrigues Caroline, even as she chastises herself for the vague attraction. Before long, he's frenziedly writing his story on a series of legal pads, and she's following up on the leads that spill from his lips as he writes. His flashbacks stretch as far back as childhood, when Clark alternately befriends and betrays the intense misfit Eli Boyle. The first betrayal occurs when Clark is caught between scapegoat Eli and scary preteen bully Pete Kramer. Adolescence, with its romantic predicaments, only complicates the relationship between these three. As Clark's narrative rolls slowly forward in time, Caroline tracks down the people he mentions. Walter is at his incisive best juxtaposing the characters in the present with their childhood selves. Spokane is carefully rendered in all its moody complexity. Wracked by urban blight and an inferiority complex (it's no Seattle), the city holds an ineffable attraction for both Caroline and Clark. Similarly, Walter's novel takes sketchy detours and its characters repel as much as compel, but lucid writing and a palpable sense of nostalgia make it hypnotically compelling.