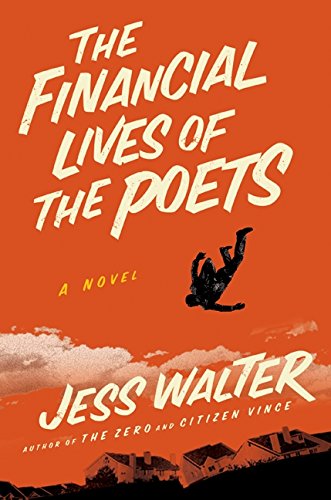 The Financial Lives of the Poets

National Book Award–finalist Walter does for the nation’s bleak financial landscape what he did for 9/11 in : whip-smart satire with heart. Matt Prior quits his job as a business reporter to start Poetfolio.com, a Web site featuring poetry about finance, or “money-lit.” Unsurprisingly, it tanks, and Matt returns to the newspaper, only to be laid off with a meager severance package. Now not only are the Priors in danger of losing their house, but Matt is convinced that his wife, Lisa, is having an affair with an old boyfriend she rediscovered during her lengthy nightly Facebook sessions. With two sons in overpriced Catholic school and his increasingly senile father to support, Matt’s bank accounts dwindle amid his financial planner’s dire predictions (diagnosis: “fiscal Ebola”). When an appealing but illegal moneymaking opportunity presents itself, Matt jumps at the chance. The decision to include snippets of Matt’s poetry in the novel was a risky one, but Walter pulls it off, never resorting to pretension or overused metaphors for life’s meltdowns.