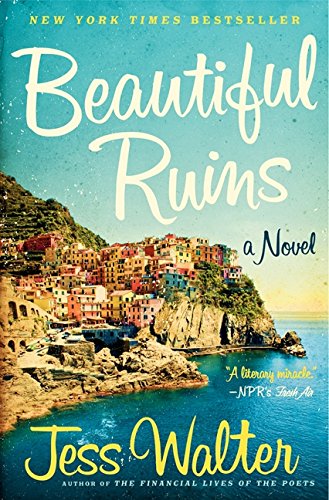 Edgar Award%E2%80%93winning author Walter's well-constructed, bittersweet romance begins in April 1962, when a young innkeeper, Pasquale Tursi, puts up the "ethereal" American actress Dee Moray, who has arrived supposedly sick with stomach cancer at the remote Italian port of Vergogna. She has come from the extravagant Rome location of Cleopatra along with the philandering, tempestuous co-stars Elizabeth Taylor and Richard Burton (Walter's title is taken from a description of Burton at 54). Pasquale soon discovers that 20th Century%E2%80%93Fox's chief troubleshooter, the young Michael Deane, has in fact whisked Dee, pregnant with the married Burton's child, away from the public eye to avoid scandal. Predictably, Pasquale falls in love with the beleaguered, vulnerable Dee, who is under pressure from Deane and the studio to get a discrete abortion in Switzerland. Fifty years later, the elderly Pasquale shows up on a Hollywood back lot looking for information about Dee's present whereabouts, much to the consternation of Deane, now a largely washed-up figure. The twisty narrative rolls on to show what actually became of Dee and her son, Pat Bender, a middle-aged, small-time performer. The Hollywood glitterati, led by the duplicitous Deane, come off looking thoroughly jaded and shallow compared to the stately, chivalrous Pasquale in Walter's (Citizen Vince) quirky and entertaining tale of greed, treachery, and love. Agent: Warren Frazier, John Hawkins & Associates. (Jun.)
close
Details