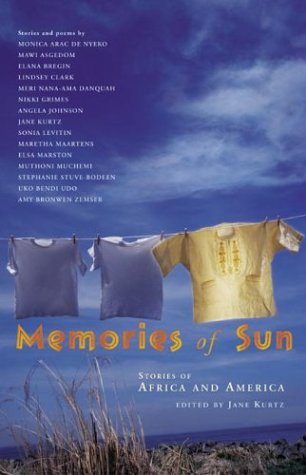 MEMORIES OF SUN: Stories of Africa and America

Offering 15 unique perspectives of Americans, Africans and African-Americans, this collection of vibrant stories and poems celebrates the distinct flavors of the African continent. The first section, entitled "Africa," evokes the beauty of African traditions, landscapes and people. Nikki Grimes captures the magical aura of the Bagamoya seaport in a poem and in a short story reveals the gentle nature and sense of loss that characterizes the disappearing Bushmen tribes. The second section of the book focuses on Americans' first impressions of the continent, crystallizing moments of discovery, awe, confusion and regret. The protagonist of Maretha Maartens's "The Homecoming" feels out of place living in South Africa until a classmate invites him home and introduces him to his wise grandfather. In the story "Her Mother's Monkey" by Amy Bronwen Zemser, even though Francine's father is mostly unsuccessful at treating injured animals during their year-long stay in Africa, her mother forms a close bond with an orphaned baby monkey. While selections in the third and final section of the volume take place on American soil, the rhythm of African life is still strongly felt. Recent exiles such as 15-year-old Kulaja, a former soldier in the African jungle, and Ajang, who had been to missionary school in Kartoum and describes the alien American culture, struggle to assimilate to a new way of life while retaining a piece of their heritage; another child who has never set foot in Africa gets in touch with her roots through stories handed down by an aunt. Providing sharp, contrasting images of splendor and strife, these selections will reverberate in readers' minds. Ages 10-up.