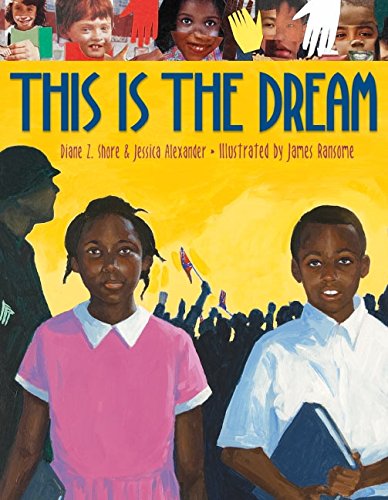 This Is the Dream

Ransome ( ) creates a striking juxtaposition of closely focused paintings and collage borders incorporating powerful historical photographs. These images will make a strong impression on readers of this expository chronicle of events preceding, during and following the civil rights movement, as Ransome's artwork makes large ideas comprehensible through visual details. The singsong rhythm and "House-that-Jack-Built" meter creates a chilling contrast to what's going on between the lines: "These are the buses—a dime buys a ride,/ but the people are sorted by color inside." Ransome shows the demarcation of the bus's white and black sections, and in a border across the top creates a collage of stirring portraits. Text and artwork similarly depict segrgated lunch counters, libraries and schools. One of the most powerful spreads portrays three black children stepping into a newly integrated school ("These are the students who step through the doors/ where people of color have not walked before"), Confederate flags flying, while a photocollage on the top edge shows the fractured images of angry white bystanders, effectively emulating a mob mentality. Concluding spreads demonstrate the contrast today, with images of a multiracial array of people waiting to use the same drinking fountain and reciting the Pledge of Allegiance in one voice at school. This will provide a solid springboard for adult-child discussions, especially since younger readers might need help deciphering some of the poetic narrative's references. All ages.