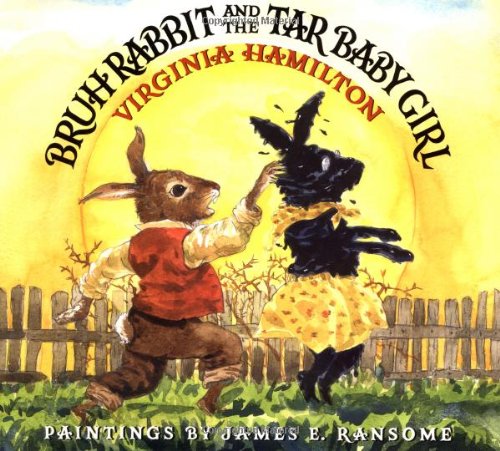 In this sparkling Gullah version of a favorite Brer Rabbit story, the immediacy and quirky originality of the late Hamilton's voice make ordinary prose seem quite dull in comparison. The author balances the dialect just right, capturing the musical sounds and cadences of the language in which the stories were first told while keeping the meaning clear to young readers: "Bruh Wolf planted corn one year, and Bruh Rabbit didn't plant a thing. Rabbit, him," she says, "is tricky-some—about to fool a body and not do a lick of work himself." Her images cunningly prod readers to emphasize words that imitate the action described: "Rabbit sneakity-sneaks along.... He's creeping low-down, slow-down, and he sees the scarey-crow— —standing still and very white in the shine of the moon." If not quite as witty as Barry Moser's Brer Rabbit, Ransome's ( ) characters ably straddle the demands of their folktale roles. They wear human clothing, for example, but their faces are animal-like both in the glassy roundness of their eyes and in their inscrutability. All in all, this version is just about as satisfying as sitting down on a croker sack and hearing the tale first-hand. Ages 4-up.