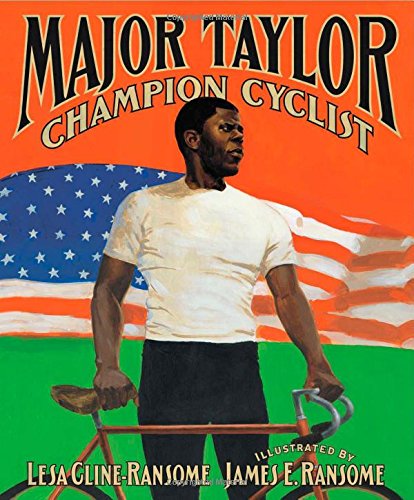 The creators of turn their attention to African-American cyclist Marshall Taylor, who in 1899 clinched the World Championship title. Cline-Ransome includes details about Taylor's boyhood that will easily snare kids' attention. While a youngster in Indianapolis, he "taught himself quite a collection of tricks" as he delivered newspapers on his bike. His prowess landed him a job in Hay and Willits Bicycle Shop. A full-bleed page divided into four panels shows the boy performing stunts on his bicycle in a military uniform, earning him the nickname of "Major." After winning his first race (a 10-mile road race sponsored by Hay and Willits) at 13, the lad left home to become assistant to professional racer Louis "Birdie" Munger and turned pro himself five years later. Concisely and affectingly, Cline-Ransome describes the racial prejudice that plagued the athlete on and off the race course: "All of the large purses won in races all over the country couldn't buy him a meal in a restaurant or a room in a hotel." Though the narrative concludes on a note of triumph, trumpeting his cycling victory in France over the 1900 world champion, a concluding note outlines Taylor's sad, destitute later years. Period particulars and deft use of light and shadow distinguish Ransome's lifelike oil paintings. Portraits of Taylor are in sharp, striking focus, and effectively convey his athleticism, congeniality and resolve. An appealing, accessible biography. Ages 6-10.