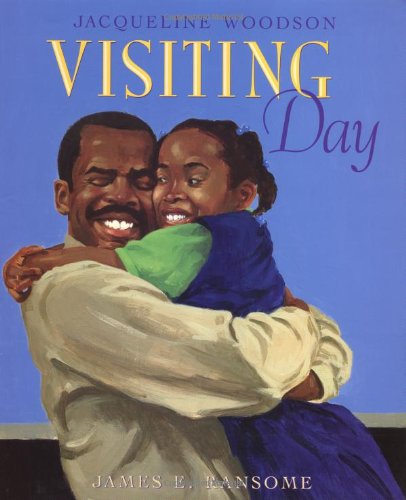 This poignant picture book chronicles a joyful girl narrator's hard-to-bear anticipation and special preparations for a journey with her grandmother to see her father. Both text and artwork keep the destination a mystery, wisely focusing instead on the excitement of the upcoming reunion. As Woodson's () rhythmic prose, punctuated by the refrain ("only on visiting day"), builds a sense of expectation, Ransome (), too, underscores the build-up. Wordless spreads depict Grandma fixing the narrator's hair and the pair climbing aboard the bus. Meanwhile, the girl imagines her father making his own preparations. Ransome portrays a handsome man in khaki shirt and slacks; a calendar on the wall marks the days to his daughter's visit, hanging next to her artwork accented with red hearts. Ultimately, "the bus pulls up in front of a big old building where, as Grandma puts it, Daddy is doing a little time." Ransome shows barbed-wire atop high walls and a guard tower in stern relief against a perfect blue sky. Throughout, he uses a radiant, rich, marine blue (the bus's accents, the girl's dress and a prison guard's uniform) to contrast freedom and captivity. Told completely from a child's perspective, the narrative makes no judgment about what Daddy did or why he's incarcerated. A shared feeling of hope and family togetherness pervades each spread, from Grandma cooking fried chicken in the morning for the bus ride, to the narrator sitting down with crayons when she gets home to make Daddy more pictures. Any child who has been separated from a loved one can identify with the feelings of this winning heroine. Ages 4-up.