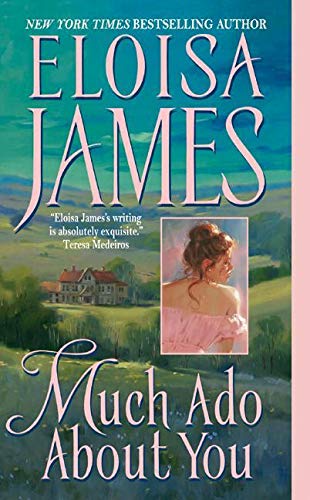 MUCH ADO ABOUT YOU

Reviewers have compared James's Regency-era romances ( , etc.) to , but her effervescent voice is somewhat subdued in this first installment of her new series, focusing on four squabbling sisters. After their father passes away, Tess, Imogen, Annabel and Josie Essex find themselves impoverished, uprooted and taken under the wing of a benevolent duke. As the eldest and most sensible, Tess decides she must marry so that she can help support her sisters. But who should she wed? Garret Langham, an earl who seems to admire, though not lust after, her? Or the untitled but über-wealthy Lucius Felton, who hides his emotions behind a mask of cool civility, save for when he kisses her? Tess is mildly conflicted but generally content to go along with whatever fate throws her way, which makes her a less than inspiring heroine. What she lacks in character is more than made up for by Lucius, however, who possesses a quiet intensity and magnetic presence. The chemistry between the two easily overshadows the rather tenuous camaraderie that Tess and her sisters share. gals they are not; they bicker constantly and rarely connect on a sisterly or even friendly level. But though the book isn't as spry as James's earlier novels, it contains a romance that will induce sighs of satisfaction.