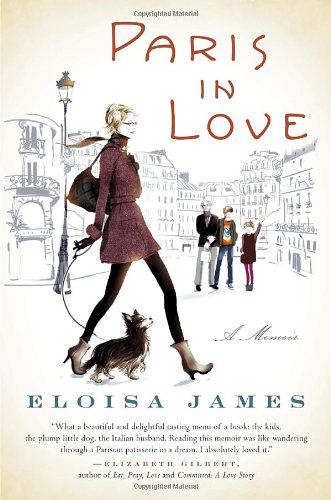 Paris in Love: A Memoir

Two American academics with growing kids shucked life in the New Jersey suburbs for a year in Paris and savored the splendors of style and gourmandise, as James, the nom de plume of romance author Mary Bly, recounts in this effervescent diary. Bly, a professor at Fordham University, wangled the family to Paris on her sabbatical after the death of her mother from cancer and her own bout with breast cancer. Her Italian-American husband, Alessandro, was the only one who could speak French, while the two children, Anna, 11, and Luca, 15, were immersed in an American school in Paris where they were shocked by the rigor and discipline compared to their American Quaker school. Living on the rue du Conservatoire, in the diverse 9th arrondissement, and aiming to write academic tomes and romance novels, the author mainly shopped, according to her percolating dispatches rendered in discrete segments like diary entries: for chocolate, shoes, emergency hair highlights, and lingerie. Dazzled by the array of menu choices and fine luxury products, she was frequently paralyzed by the Frenchwoman’s ability to look chic without being studied or silly. While the children struggled then triumphed in school and with new friends, the dog grew fatter, and Alessandro advised his French conversation partner in affairs of the heart, James/Bly discovered a “materialist’s playground” in Paris, finding just that precious objet or museum or nibble, and relaying in her sensible, reflective prose the lessons to take home and dream over. Agent: Kim Witherspoon. (Apr.)
close
Details