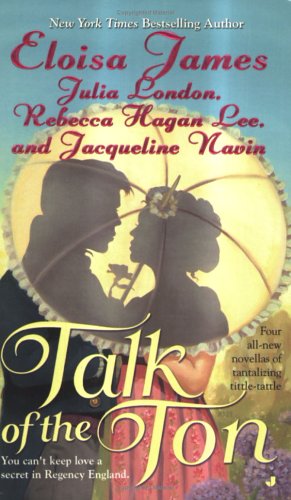 TALK OF THE TON

Gossip figures prominently in three of the four Regency-era novellas included in this collection, which is, unfortunately, as shallow as a Hollywood rumor rag. James incorporates the theme she used most successfully in "A Proper Englishwoman," employing a number of gossipy letters as a prelude to a bold, if unlikely, tale of seduction. Far less inventive are London's "The Vicar's Widow" and Navin's "Miss Jenny Alt's First Kiss." The former is a predictable tale of two lovers and the jealous debutante who will do anything, even spread nasty rumors about a virtuous widow, to pull them apart, and the latter is an equally familiar romance between a bookish beauty with an undeserved reputation and a handsome lord. Lee's "Clearly a Couple" stands out both for its exemplary writing and its unique heroine, though the story has very little to do with gossip. Its premise is also far too meaty for such a short story, so it inevitably falls prey to the same flaw as the others—the protagonists' love comes too swiftly and unbelievably. All in all, this lackluster collection is a pale representation of these authors' works and isn't likely to stir up much chatter in the romance community.