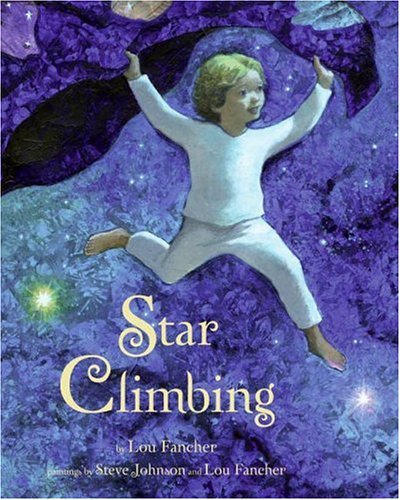 Ethereal, textured paintings accompany Fancher's rhythmic, lyrical poem about a child's imaginary journey through the night sky before he or she drifts off to sleep. "On nights I cannot sleep,/ I go star climbing./ Tiptoe over low-hung clouds," says the narrator, pulling a colorful blanket out the window that gradually transforms into rolling white clouds. Leo the Lion, Ursa Major, Pisces, Draco the dragon, Pegasus and Cygnus appear on the child's coverlet, but one by one, they become part of the fanciful adventure in the night sky. The six star-studded, mythical creatures represent familiar constellations and accompany the child until he or she falls asleep and wakes to the morning star—"To glowing sun... and day... and home." In one luminescent painting, the child sits astride Cygnus the swan while their rippled image appears, reflected in the liquid blue pool as they "float across the blue-hush sky." On the next page ("eyelids heavy,/ gently closing"), the artists portray the angelic child's face close-up on a pillow of swan feathers. An appendix prosaically describes each animal constellation's myth, and not every painting exactly matches the description in the text, but no matter. This dreamy bedtime poem with its magical, moon-dappled illustrations may well dazzle star-struck young readers night after night. Ages 3-8.