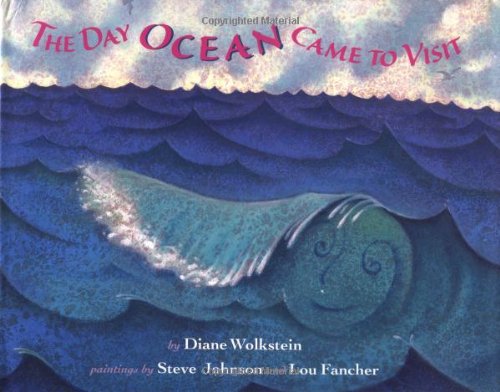 THE DAY OCEAN CAME TO VISIT

Wolkstein's () lilting tale explains how the sun, moon and stars came to be in the sky. She imbues the narrative with gentleness and humor, as Johnson and Fancher () contribute the same spirit of quiet adventure. Sun and Moon possess human forms and softly luminescent heads, living a cozy, married life on earth in a large bamboo house. Sun "made their roof very high, because both he and Moon were very tall." Moon tends her garden while Sun "liked to travel." The artwork depicts the celestial man of the house riding astride a giraffe "to explore the world." One day, he invites Ocean, whose smiling face peeks out of the waves, for a visit and, in preparation for her arrival, he expands his house till it "stretched nearly as far as the eye could see." Children will anxiously anticipate Ocean's entrance, and both text and illustrations may well exceed their expectations. " 'This way.' Moon pointed, trying to lead Ocean into the dining room. But Ocean flowed into all the rooms.... Turtles and fish and seals and dolphins were swimming about inside their house." The artists convey the couple's initial welcoming look as it changes to anxiety and panic, then finally to liberation when Moon finds a solution: they ascend to the sky where they have lived ever since and gave birth to the stars. This is poetry in both words and pictures. Ages 3-7.