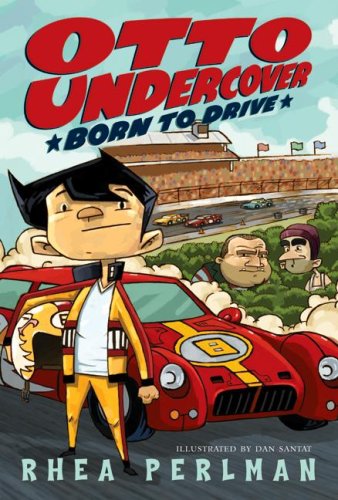 In the launch title of the Otto Undercover series, Perlman's mostly feeble stabs at humor will likely elicit fewer laughs than her deftly delivered comedic performances as an actress. In the driver's seat is Otto Pillip, who has built his own racecar, the fastest on the planet, which, given his penchant for palindromes, he has named Racecar. Since his parents left years ago (allegedly on an expedition to discover the eighth continent), Otto has lived with his two aunts, who helped him get his driver's license (which entailed passing a 30-page written test) and wrote a note "to get him out of school for the rest of his life." The villains here are two bumbling blockheads who "were both in third grade for eight years, till they got kicked out of school for setting fire to the teacher." Determined to win the $1 million first-place prize in a big road race, this dastardly duo steals Racecar, leaving a look-alike in its place. Luckily, Otto has some inventions up his sleeve and a happy ending is in store. Santat's brash cartoons add to the inanity of this slim caper, which contains numerous palindromes, anagrams and backward words, decoded in the pages' margins. The second title, (0-06-075498-2; paper 0-06-075497-4) is being published simultaneously. Ages 7-11.