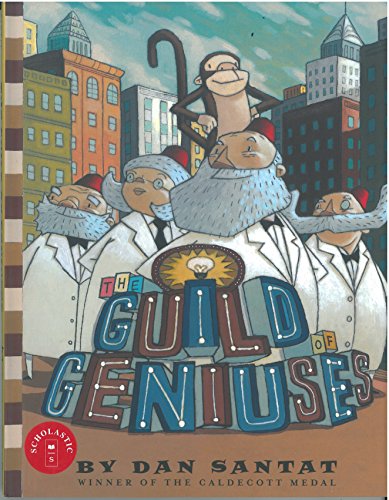 THE GUILD OF GENIUSES

Kitschy fifties design and appealingly drawn characters make this a promising debut from Santat, despite a disjointed plot. Mr. Pip, a long-tailed monkey, and Frederick Lipton, a movie star with a black pompadour and goatee, share a warm friendship. Images show them playing with cereal-box prizes and goofing off in Frederick's tiki-décor abode. But on Frederick's birthday, so many fabulous gifts arrive that Mr. Pip cannot find the right moment to give Frederick his present; the fellow huddles in the lonely lower-right corner of the page, clutching the drawing he made for his friend. Frederick doesn't understand Mr. Pip's sadness, so he sends the monkey to the Guild of Geniuses ("four of the smartest people in the world") to determine the problem. The gray-haired, stoop-shouldered Guild—three men and one woman, wearing lab coats and red fezzes—send Mr. Pip on a moon mission and try to cheer him up. Nothing works until Frederick rejoins his pal; Mr. Pip had needed togetherness "in the first place. It doesn't take a genius to figure that out." The episodes allow Santat to showcase his lively acrylics, with their 1950s mod streamlines and nostalgia for beatnik fashion. However, the story of Mr. Pip and Frederick's misunderstanding is awkwardly attached to that of the inventors (who are barely introduced). Nonetheless, readers should keep an eye on Santat's attention-getting art and sympathetic monkey hero. Ages 4-8.