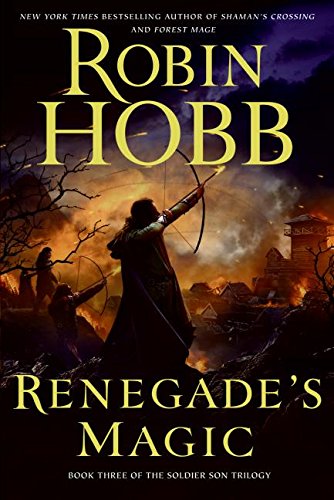 In the haunting conclusion of Hobb’s Soldier Son trilogy (after 2006’s ), Gernian soldier Nevare Burvelle escapes from prison with some help from his lover, Lisana, who divided his soul so that he could become a Speck mage called Soldier’s Boy. The two personalities now awkwardly time-share Nevare’s body. Using Soldier’s Boy’s powers, Nevare tries to destroy the Gernian road that threatens to ravage the Specks’ forest home, and almost dies from exhaustion. Nursed back to health by Olikea, the Speck woman whose sole duty is to feed him enough to power his magic, Nevare must find a way to keep Gernia from destroying the forest, prevent the Specks from further spreading the plague that has decimated the Gernians and reunite the severed halves of his soul. Hobb’s dreamy prose is sometimes weighed down by a confusing magical system and glacial pacing, but she provides a stunning resolution to this epic fantasy about the importance of environmental and social balance.