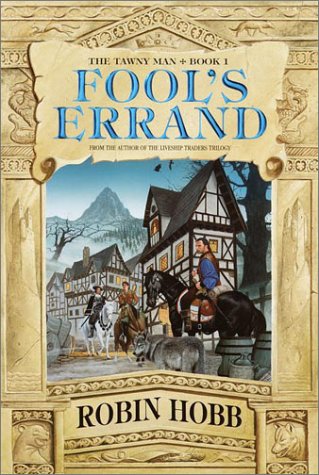 FOOL'S ERRAND: Book I of the Tawny Man

In this hard-to-put-down follow-up to the Farseer Trilogy, Hobb maintains the high standards of her earlier fantasy series. The Fool and FitzChivalry Farseer band together once more to ride against the foes of the Farseer royal family in the kingdom of the Six Duchies. Last seen in , FitzChivalry (aka Tom Badgerlock due to the shock of white in his dark hair) has matured beyond the youth blindly following orders. For the past 15 years, Fitz has quietly led the life of a semi-recluse, trying his hardest to disappear. Believing that his glory days are over, he's surprised when fate (in the form of the Fool) pulls him back into the political intrigues that plague the Six Duchies. Endowed with both royal Skill magic and beast magic, Fitz assumes the task of returning the wayward heir to the throne, Prince Dutiful, to his home before his betrothal ceremony—something that should be an easy task. In the event, the easy task proves extremely difficult, both physically and mentally for Fitz. The first half of the novel mostly focuses on Fitz's angst-ridden past. The heart-thumping, sword-clashing action that Hobb is known for emerges only during the second half, bringing Fitz fully to life. This is not to say that the first half is by any means dull. It's not. But the full range of Fitz's capabilities doesn't come to the forefront until later. When the action sequences finally kick in, they're non-stop. What starts as a very good read shifts into a stay-up-until-2:00 a.m.-to-finish type of book.