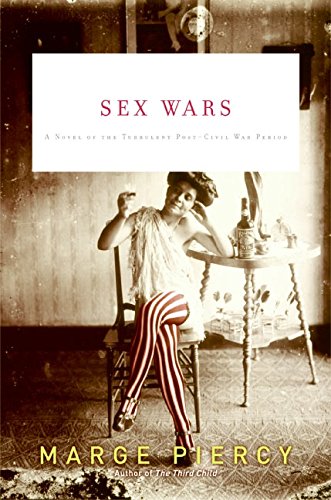 This rich novel set in post–Civil War New York stars a true-life cast of characters that includes Victoria Woodhull, the spiritualist turned first woman to run for the U.S. presidency; passionate suffragette Elizabeth Cady Stanton; the aged Cornelius Vanderbilt, who sits atop a $100-million fortune as he tries to make contact with his dead son; and Anthony Comstock, a crusading moralist who dedicates his life to outlawing pornography and "obscene objects made of rubber." As they each vie for different kinds of sex-based power, the consequences of their actions echo from the halls of Congress to Manhattan's back alleys. Piercy ( ) powerfully dramatizes the early feminists' zeal and the high stakes of the gender wars it set in motion, and offers a wealth of period detail, including tips on using an outdoor latrine when living in a fifth-floor walk-up and the cost to bathe (fully dressed, no soap) in the East River. Most poignant among the invented characters is Freydeh Leibowitz, a young Russian-Jewish widow, who, far from the scandalous headlines and saloon gossip of the times, makes a living for herself and her adopted children, penny by penny, as a manufacturer of reliable condoms. Stylistically, the narration and dialogue don't wow, but the people, their ways of living and the ways they are marked by sex certainly do.