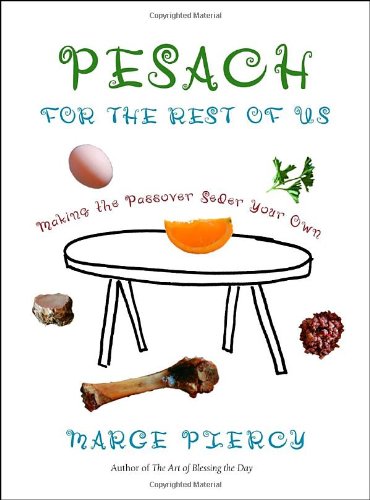 Pesach for the Rest of Us: Making the Passover Seder Your Own

The traditional Passover seder is dissected, reinterpreted and given a contemporary and feminist bent in Piercy's guidebook to making the haggadah more readable and meaningful to today's unaffiliated Jews. Novelist Piercy confesses that her own Passover preparations are "heavy on the convenient"; for example, she will use the prohibited sunflower oil to make her dishes tasty. She wants to focus instead on what brings resonance to her observance of the holiday, like adding the Cup of Miriam to her seder table and including a Fifth Child in remembrance of those murdered during the Holocaust. Nearly every page reminds readers to change parts of the seder as they see fit, though traditionalists may feel that this approach belittles the traditional seder. Throughout are Piercy's poems recognizing many aspects of the seder; her own slightly sloppy rendition of traditional blessings into the feminine Hebrew; and ideas on how to create one's own English prayers. Memories of her Grandmother Hannah's Pesach segue into old-time recipes of the holiday's traditional foods, and an entire chapter is dedicated to mouthwatering recipes that can be used for the main meal. Some tangents in this conversational guide seem gratuitous, while others—including histories of the origins of wine, horseradish and other seder foods—are fascinating.