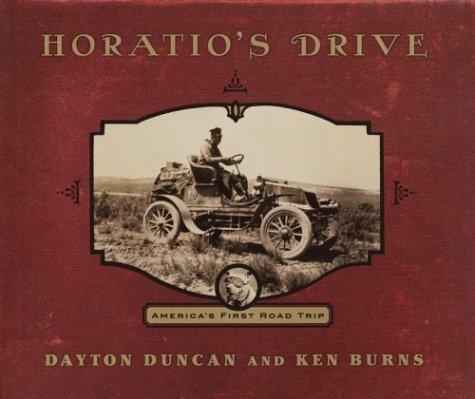 Technological revolution makes the unthinkable routine—and what could be more quotidian than an automobile trip across America? Yet at one time such a notion seemed about as likely to succeed as jumping Niagara in a barrel. Burns and Dayton are responsible for the upcoming PBS film about the adventurous first-ever car trip from coast to coast; this is the picture-packed print companion. Impetuously responding to a dare in May 1903, Dr. Horatio Jackson rashly wagered $50 that he could traverse the continent in 90 days. Bankrolled by his wealthy wife and accompanied by mechanic friend Sewall Crocker, Jackson set out for New York from San Francisco. Crossing a landscape devoid of paved roads, roadmaps and streetlights in a vehicle without multiple gears, roof or windshield and capable of a mere 30 mph, the two men ran into considerable problems in Northern California, Oregon and Idaho. (Meanwhile, other, corporate-backed aspirants to the distinction of being first across the country were hot on their heels.) Hardly anybody they encountered had ever seen an automobile before, so the men repeatedly became local heroes before becoming celebrities on a national scale. Few can match nationally famous PBS documentarian Burns's skill at evoking the past visually, and this book does nothing to undo that reputation. (Any picture featuring Bud, the goggled bulldog they adopted on the way, is a winner.) Meanwhile, Duncan, responsible for the research and the text, delivers a graceful, concise, engrossing account.