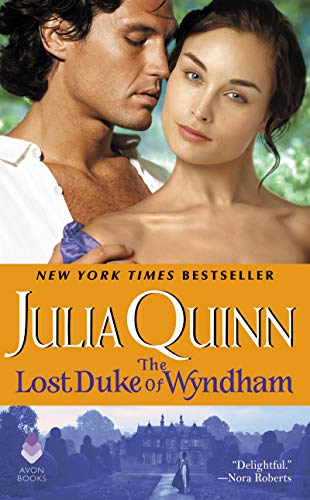 The Lost Duke of Wyndham

Quinn ( ) embarks on a new series with Grace Eversleigh, companion to the dowager duchess of Wyndham, unwillingly helping the dowager kidnap a highwayman. The dowager believes Jack Audley, a former Army Captain, to be her grandson, the son of her long-deceased favorite son. But the current Duke of Wyndham, Thomas Cavendish, Jack's ostensible cousin, learns that he could be disposed of a title if it is proven that Jack's parents were married in Ireland before their untimely deaths. Jack attempts to overcome his tortured past with a quick smile and easy wit, and sparks between Jack and Grace result in a number of sizzling scenes that are made more powerful by the intensity of emotions involved. In her strongest effort to date, Quinn delivers complex, multifaceted characters who come vividly to life.