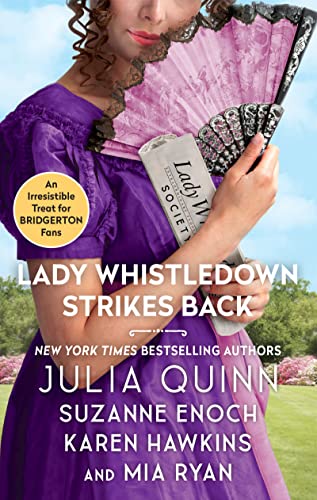 A strong and charming encore to , this superb Regency-era novella collection is punctuated by gossip columnist Lady Whistledown's witty comments and penned by the same authors who contributed to the previous book. A disastrous dinner party during which a ruby bracelet goes missing—and four couples discover or rediscover their soul mates—sparks the collection. Each tale follows one pair as they tackle the obstacles to love, but the stories are skillfully interwoven to the point where they present the same encounters and relay the same dialogue from different points of view. At times, references to the other couples can feel forced, but the authors are largely successful in piecing their hilarious and sometimes touching stories together into a delightful romantic quilt. Similarities abound: the heroines are unwed virgins, the heroes unwed but not virginal, and all are filled with gratitude that they found each other. Only Hawkins's story, featuring a wedded couple estranged for 12 years, stands strangely apart, as it explores the darker issues of pride, betrayal and forgiveness. Sure to be as popular—if not more so—than the previous , this winsome collection is a cut above most romance anthologies.