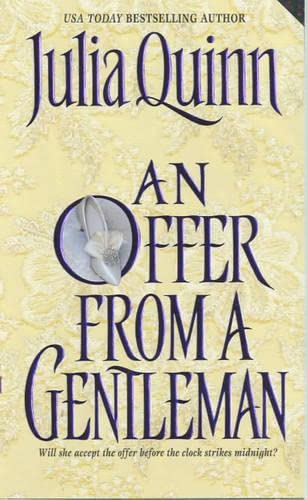 AN OFFER FROM A GENTLEMAN

A retelling of the classic fairytale, this Regency romance gets off to a slow start as Quinn () introduces a troupe of stock characters—the wicked stepmother, aloof stepsister and warm-hearted but weak younger stepsister. Thankfully, Quinn doesn't make her Cinderella suffer these tired old relations for long. After her stunning debut at the Bridgerton masked ball and a heady encounter with handsome Benedict Bridgerton, Sophie Beckett, the bastard daughter of an earl, is summarily ousted from her home when her stepmother discovers that Sophie had attended the masquerade. Three years later, Sophie, now a housemaid, is rescued from her new employer's sex-crazed son by none other than her long-lost "prince." Although Benedict is attracted to Sophie and agrees to find her a position as a servant in his mother's house, he fails to recognize her from their encounter at the ball. A charming romance develops as Benedict tries to convince Sophie to become his mistress and Sophie refuses to succumb to his dangerously seductive offer. Quinn's narrative truly blossoms once she departs from the fairytale's traditional plot line. With its storybook ending and lovable characters, this bedtime romance is certain to satisfy.