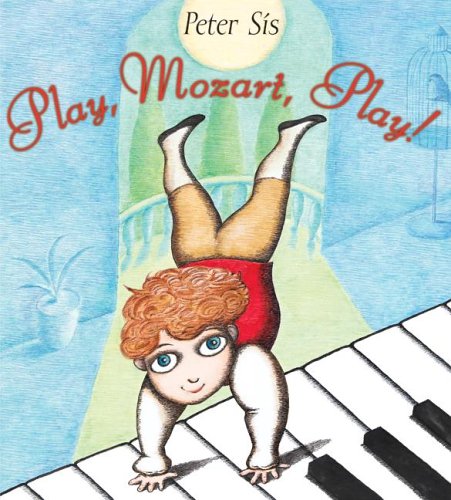 Sís's ( ) whimsical imagination is in full play here as he presents an intriguing if somewhat unsettling portrait of Wolfgang Amadeus Mozart's unconventional childhood. After learning that "His father turned him into a child sensation!" readers repeatedly view the man's hovering specter, represented by an often oversize, dark silhouette sternly wagging a finger at his young son as he commands him to "Practice, Mozart, practice!" The pressure placed on this young prodigy will not be lost on kids: rather than play with children, Mozart "played day and night. He played in his imagination. He played in his dreams. He played for his entire life." The text is minimal, taking a back seat to Sís's inventive, lively and eclectic black line and watercolor art. He incorporates a wild array of perspective, color, texture and imagery. In one striking, surreal spread, in which the youngster relentlessly practices the piano (while his father lurks, sentinel-like, at the door), objects from the room waft from the score he is playing, transformed into dreamlike images: a flute sprouts wings, a wax-covered candelabra acquires facial features, a cup and saucer spring to life. And, hauntingly, readers view a man's head submerged in water, only the eyes visible—perhaps a clue to the boy's sentiments about his demanding parent? A concluding biographical sketch offers some astounding particulars underscoring Mozart's genius: he learned his first musical piece in only 30 minutes just three days before he turned five, wrote his first composition that same year and played at European courts at the age of six. A virtuoso performance from a true maestro of his craft. Ages 3-up.