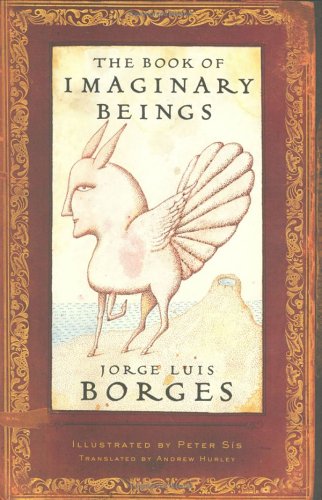 The Book of Imaginary Beings

The master, writing with sometime collaborator Guerrero, compiled 82 one- and two-page descriptions of everything from "The Borametz" (a Chinese "plant shaped like a lamb, covered with golden fleece") to "The Simurgh" ("an immortal bird that makes its nest in the tree of science") and "The Zaratan" (a particularly cunning whale) in in 1954. He added 34 more (and illustrations) for a 1967 edition, giving it the present title, and it was published in English in 1969. This edition, with fresh translations from Borges's translator Hurley, and new illustrations from Caldecott-winner Sís, gives the beings new life. They prove the perfect foils for classic Borgesian musings on everything from biblical etymology to the underworld, giving the creatures particularly (and, via Sís, whimsically) vivid and perfectly scaled shape. "We do not know what the dragon , just as we do not know the meaning of the universe," Borges (1899–1986) and Guerrero write in a preface, and the genius of this book is that it seems to easily contain the latter within it.