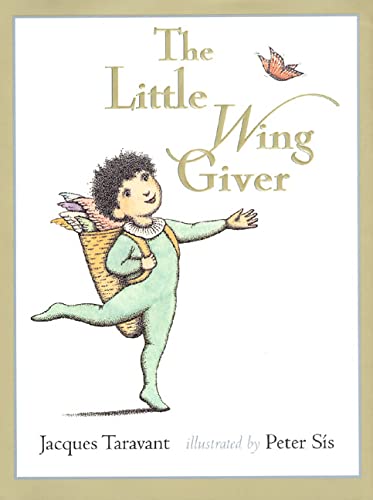 Caldecott Honor artist Sís () provides fittingly wispy, ethereal art for this allegorical tale about the first angel. The late Taravant, a French diplomat, penned the lyrical story for his son (it first appeared posthumously in ). Long ago, when no creatures had wings, there lived a Little Wing Giver whose origins were unknown: "Perhaps he was born inside a flower one morning. Or perhaps he slid down to earth on a moonbeam one summer night. Or perhaps God had realized He'd forgotten to give out wings and sent the little boy to complete His creation." In full-page and vignette illustrations, Sís follows the cheerful youngster as he traverses the land, handing out wings to birds, bugs and butterflies, until "all the creatures you can think of had the wings they now have." One dramatic scene depicts the boy riding on a stork high above the ocean; another shows the climax, in which the lad lies down to rest and the jealous wind, whirling around the frame of the picture, hurls his wings in its wake. The hero performs one last act of kindness before falling into a deep slumber—then his winged pals find a way to repay him. A penultimate view of the hero's ascension and the following scene featuring a parade of flying birds, rendered in soft pastel shades, close the volume on an uplifting note. All ages.