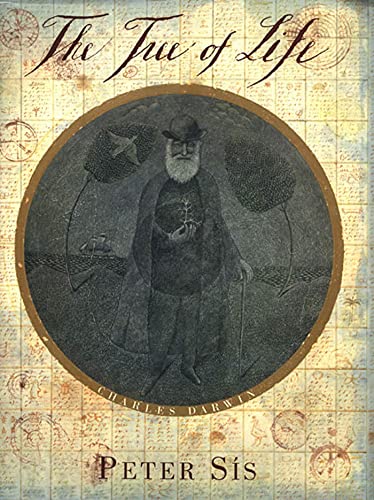 THE TREE OF LIFE: A Book Depicting the Life of Charles Darwin, Naturalist, Geologist & Thinker

In another stunning picture book biography, Sís ( ) trains his attention on Charles Darwin. From the naturalist's early days ("Charles doesn't like... school") to his father's initial refusal to let him sail aboard the H.M.S. to the explosive reaction to his theory of natural selection, Sís traces the arc of the scientific giant's life. The sheer amount of information he compiles and presents—all with great fluidity and ingenuity—is nothing short of staggering. Not an inch of space goes unused (including the endpapers, which extend the major themes of Darwin's career through a patchwork of elaborate motifs), and the result is an opulent and vastly absorbing tapestry of maps, thumbnail portraits, diary entries, floor plans, family trees and more, including an elaborate gatefold that illuminates Darwin's major work, . Sís's trademark style, with its meticulous cross-hatching, pointillistic images and slightly enigmatic air, invites close inspection and repeat readings. His knack for defining not only the grand events of a subject's life, but also the humanizing particulars once again make a complex subject accessible to readers—Darwin's daily domestic schedule, for instance ("12:00 noon: Rain or shine, stroll around the Sandwalk with Polly, his dog") and his childhood nickname ("Gas"). Sweeping in scope, lavish in detail, this is a book to launch many a reader's personal voyage of discovery. Ages 8-up.